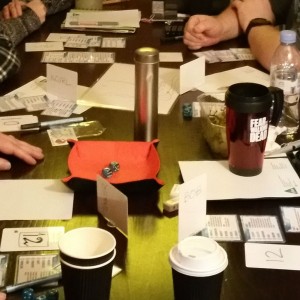 I ran The Blood of the Zygons this last weekend for Doctor Who (Vortex system) and I declare Quick Characters a workable option. Not flawless, but workable.

I introduced the base game mechanic (2d6 + two character scores) and got going with the adventure.

When the time came for some action, I laid out the college cards – which show the Attirbutes and a Trait or two – and asked the players who wanted to meet a challenge which card they wanted. At that point, most of the players committed to taking a card. I had the roll based on two Attributes at that point.

Next challenge, I revealed the bottom row of cards, which display Skills and an Attribute adjustment, with a Gadget thrown in for good measure. The players all opted to take something straight away this time – probably because the unfolding adventure put them in immediate peril.

The final card followed before the scene closed and the theme music cut in.

I Don’t Have That…
Over the course of the game, I did find once the characters split up some found having the right skill an issue. When I declared a combination of Attribute and Skill, the response was they’d have one and not the other. With a full character, this would simply be a Skill with a low or zero value.

I think I’ll plug that gap with Story Points. In a short convention game, Story Points don’t actually get spent as quickly as you might like as a GM. At a push, characters in a bind can get a Skill in something – as a one off – by spending a Story Point like the “Like This, Doctor” ability. A straight +3 modifier for a single Point should suffice and make the difference where there’s a shortfall.

That should keep the story moving and the Story Points flowing, so by the end of the adventure the players might get the sense of impending doom that comes with a Story Point overdraft…