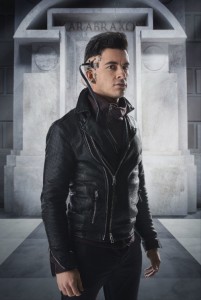 OK – so, I don’t think that we have done a bank job before. Or done something quite so Ocean’s Eleven with time travellers thrown into the mix.

I can see the potential for entertainment value here – and, I wouldn’t rob Time Heist of any redeeming features. However, it didn’t really do it for me. Even having the delectable Keeley Hawes on-board, as the steely Ms Delphox, didn’t win me over.

At a basic level we have a Dark City scenario wrapped up with a bank job. The team gathered to complete the job have all had their memories wiped from the outset, but a message tells them what they need to do. I liked the slugs – they were kind of neat. I have a soft spot for creatures with weird defensive (or offensive) abilities that, in the hands of the ingenious, can be turned to another purpose altogether.

Anyway – we have Psi and Saibra on the team. One, a jacked up cyber-guy, the other a mutant capable of taking on any form. Both have something to gain from this job, specifically the ability to lose something, something that has hampered their existence. If they can pull off the impossible bank job, they will have their prize. However, Delphox has a pet mind scrambler in her arsenal – and she doesn’t have much patience for the guilty.

Yes, I found many aspects of the premise interesting. However, the Psi and Saibra felt just plain too shallow for me to care much about their sacrifices along the way.

I liked the basic idea of the Teller – and where that went story-wise sort of worked for me – but, I’m not sure it struck the right cord as a threat. Yes, it can turn your brain to mush when you’re found harbouring guilt, but in the end – why? Why such a heavy-handed approach to security? How do you keep up such an overwhelming profitable banking business when any customer might die at a moments notice for holding fleeting thoughts about steeling a pen from the counter, or a few credits from the vault?

The whole explanation for why… well, guilt and such is all well and good. We have had the Doctor haunted by guilt since the start of the new series 9 or so years ago. Even given the stakes involved, would the Doctor really have any cause to get involved like this?

Highlight of the episode for me remains the security check where you see a pile of faces of known criminals – and they include the likes of Abslom Daak, the Dalek Killer, and Captain John, from series 2 Torchwood. I love a knowing and appreciative nod to the wider continuity.

In the end, however, I didn’t really enjoy this so much – especially given how great the episode Listen proved to be the week before.