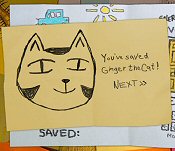 Poor cat. Poor poor poor cat. How could they do that to poor lil’ Ginger? They say, as an actor, you never want to work with animals or children. Well, this episode must have been a real fright for the adults involved!

I enjoyed Fear Her a great deal. Except for the business with sticking the cat in a box. Poor thing! No… really, it was a good episode. I mean it wasn’t great; but, I did find myself rooting for Rose as she raced to save the whole world from a fate worse than Vision On. Given the overwhelming prospect of preceding the final double-parter, I’m not sure you can really do much more.

So, next week Torchwood is revealed. And we find ourselves faced with the prospect of a Rose-less future, given that the Press (and the BBC) have confirmed Billy Piper’s departure. Boy oh boy – I sure hope she gets the explosive send off she deserves – and the Cybermen get a chance to prove their metal outside of the confines of their earlier somewhat wretched tale.