Isn’t it great when by pure chance you come across something you didn’t expect. I hadn’t seen the reference to this short story on the Doctor Who site… I just happened to get the Sunday Times because, well… it had a picture of the Doctor on the front.

Paul Cornell (who I met in the early 90s at a book signing session in Leeds) writes a fine short story about the Doctor who chances upon a 4 year old boy under inexplicable circumstances. Short, enjoyable and with a poignant ending that seems to suit the current Doctor’s mood perfectly, I’m very happy to have got it!

Wonder how much this little keepsake will be on eBay soon!

Like Love & Monsters (from second series Doctor Who), this episode followed a normal person – by and large – getting involved in things out of the ordinary. I felt it worked for all sorts of reasons and the larger-than-life characters make it all the more accessible. It was a blessed relief to watch an episode that didn’t involve sex in all the wrong places. Instead, we concentrated on Eugene’s obsessive belief in aliens and the extraterrestrial origin of the glass eye in his possession.

Perhaps I could criticise the story for the indifference of the rest of the Torchwood team, right up to the last moment. I can’t quite figure why Jack would be so dismissive – though perhaps it emphasizes how focussed the team can be to the point of dangerous ignorance. Torchwood intends to save the world to the exclusion of all else… but sometime, those who need saving reside far closer to home and might not have world-destroying plans or dangerous otherworldly powers.

The ending? Perhaps we’ll see Eugene again? Given the reference to death and the afterlife in the last episode (Suzie: Do you want to know a secret? There’s something moving in the dark and it’s coming, Jack Harkness, it’s coming for you…), it makes you wonder whether we’ll see more of the dark world beyond.

Ha! Just finished the puzzle from the 7th day of the Doctor Who advent calendar… What do you mean what’s taken me so long? 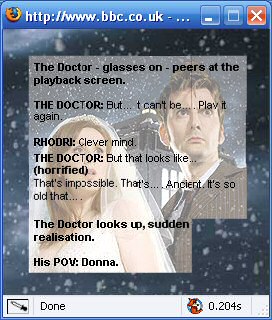 I sit here, the night before Christmas, and I realise I have a little bit of catching up to do. I’ll add the missing Torchwood episodes when I do my “Runaway Bride” entry tomorrow afternoon. Here’s to an excellent Christmas and a Who-y New Year!

Careful now… that’s three excellent episodes almost running concurrently… four if you allow for certain weaknesses in the close of Countrycide. This was great to watch and actually proved even better on a second run through, because somehow I missed some of the details in the first viewing. Like the other good episodes in the series so far, it benefited from trying to be itself and not trying too hard to be something else… if you know what I mean. Bringing Suzie back created some internal continuity and provided a chance to show just how isolating, maddening and damned terminal a position at Torchwood can be. When you die, Torchwood claims you… body and soul.

Interesting to see some more tidbits about Jack – and the ominous announcement by Suzie that something lies out in the void beyond life and it wants our troubled Captain back. Nice to see the local police getting their own back and having a bit of fun at the expense of Torchwood. I feel it’s important to maintain some sort of link with reality – Jack and Co. simply can’t go running around all the time expecting to get away with anything without any consequence or repercussions from local law enforcement and the military.

Weak point of the episode… I know night can transition into dawn and the light of morning quite quickly… but Owen made it clear Gwen had about 45 minutes left to live – and it was dark outside. When Suzie got Gwen to the ferry – with only moments left of the latter’s life – we found the sky bright and blue. Needed to have a twinge more dawn light in the earlier scene to make the bright daylight of the later scene seem right for less than an hour later…

Of course someone can always prove me wrong… and then this will be a near perfect episode.