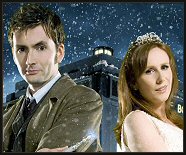 Who had a good Christmas… and yes, I’m two months late saying that. I know, I know. We had the excellent The Runaway Bride – with one of the most memorable chase scenes ever, with the TARDIS chasing a taxi down a dual carriageway. Pure Christmas Who (yes, I know we have only really had two Christmas Who episodes like this up to now.. but, it’s setting a certain standard for itself).

To add to the mix, I thoroughly enjoyed the musical evening of Who televised over the Christmas period on BBCi. Great stuff. I ended up watching it three times on the same day. I still love the mournful theme from the end of Doomsday.

And then The Sarah Jane Adventures – the most brilliant spin-off from Who so far. Forget Torchwood – this thing has so much potential it hurts… and it’s for children. I mean – no fair. I don’t care how old Sarah Jane might be – she’s a fox! It could so easily have been really cheesy and bloody awful, but it worked brilliantly. Even the glimpse of K9 maintaining a vigilant watch upon a threatening blackhole in deep space. More, more, more!