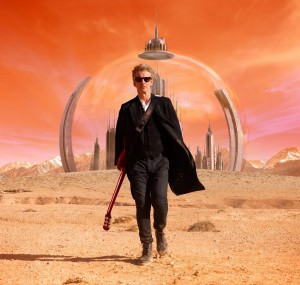 If anyone cares about my opinion, I enjoyed Hell Bent.

I liked the stand-off at the beginning, with connections back to earlier episodes in the ‘barn’ – and the sense that the Doctor had the people behind him as a hero. The line in the sand and the escalating interest from the Time Lords… that worked for me, and I found it amusing.

The resolution of the Hybrid might not have necessarily been quite as expected, but I guess that was the point. It shouldn’t have been as expected, as then we would have been complaining it was all obvious. I think this sort of harkened back to the unofficial history of Gallifrey and The Other. The Doctor is a figure of significance in the history of Gallifrey, but not one who stands front-and-centre such as Rassilon or Omega.

I liked the Cloister Wraiths. I look forward to seeing more of The General – if for no reason other than the increasing possibility that The Doctor really might one day regenerate into a female form (Missy, The General and Romana show you just how brassy and ballsy a female Time Lord can be, so I say, why not?!).

I really liked the end because it turned the tables and left us knowing something The Doctor doesn’t. Personally, I’m all for the notion of what happens and the possible adventures ahead for The Diner.

For me, this was Maisie William’s strongest performance. Me felt self-assured and Maisie came across really well. It might have been the intention all along, but her turn as Ashildr has never really convinced me. Even in ‘Face the Raven‘, Me didn’t quite have the solid sense of the actor in control. I’m not quite certain what it was. ‘Hell Bent‘ finally served up the character played right and Maisie acting with the confidence you feel in Thrones. Heck, maybe I’m misplacing the blame and should aim my finger toward the director or the script? Who knows…

I hope that we can now have an accessible Gallifrey and a prospect of Time Lord intervention now and then. I sort of liked the arrogant and mildly incompetent touch of old. With Rassilon gone, why can’t we have a Gallifrey once more without the sense of being the greater evil?